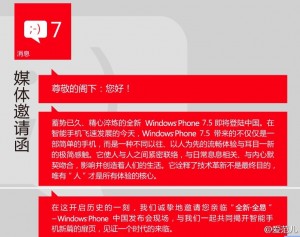 Not much else is detailed in the invitation, we do expect the latest Windows Phone 7.5 devices to be present. Hopefully, the recently announced Nokia lineup and HTC Triumph will make a preview appearance as well. Nokia does have their own China welcoming event planned for March 28, as reported. HTC will most likely hold their own Triumph welcome party in their new Beijing store as soon as it retails.

Get ready to party, China!