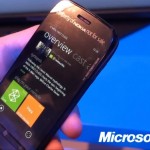 Now that Nokia has announced new hardware in the form of the Lumia 710 and Lumia 800, Microsoft is using Nokia World 2011 to showcase Windows Phone 7.5. They were showing off demos of an Xbox Companion app that will act as a basic remote control. That in itself is a nice find, but there's more. A closer look reveals an orange tile that says "VUDU Movies". Vudu's streaming music … END_OF_DOCUMENT_TOKEN_TO_BE_REPLACED