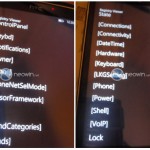 It looks like WP7 might be getting it's own version of FaceTime, at least according to some registry nosing around done by the fine folks at Neowin. Originally spotted by poking around in the file structure, references were made to a "selfportraitcamera," and at CES a Microsoft employee mentioned that a video chat application might be seeded out via Microsoft Live so it would … END_OF_DOCUMENT_TOKEN_TO_BE_REPLACED