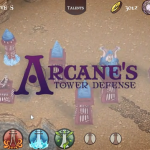 French developer Graphic Stream has posted a release candidate video for a tower defense game they are developing for the Windows Phone 7 market. The game is called Arcane's Tower Defense and seems to have everything you want in such a game. We warn you, after watching the video at the link above you might have the urge to rush the developer to release the game already. From … END_OF_DOCUMENT_TOKEN_TO_BE_REPLACED