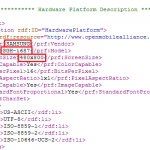 Back in May, it was rumored that Samsung was working on several Windows Phone 8 devices that will be the equivalent of the Galaxy S lineup. Even the fact that Samsung had a device hidden (at the time) under the code name "Minuet" was also reported. The biggest part about the rumor earlier this year were some reported specifications, along with the fact that the device may be … END_OF_DOCUMENT_TOKEN_TO_BE_REPLACED