ZTE stated the newly announced ZTE Orbit includes NFC support at MWC 2012. Many were led to immediately believe this NFC support was part of Windows Phone Tango. That's not the case, as Microsoft has elaborated. Company representatives at Mobile World Congress even personally confirmed that handset did come with NFC support built-in and would be available based on … END_OF_DOCUMENT_TOKEN_TO_BE_REPLACED 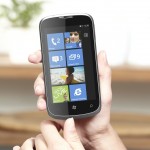 ZTE is another company that hasn't shown up much (yet) in the Windows Phone scene. Now, they are adding the ZTE Orbit to their Windows Phone portfolio, originally only consisting of the ZTE Tania. The ZTE Orbit was announced at MWC 2012 and sports a 5 MP auto focus camera with LED flash, 4 GB of internal memory, 1 GHz CPU, 4" 800x480 WVGA display, HD voice, all on the Windows … END_OF_DOCUMENT_TOKEN_TO_BE_REPLACED