Microsoft isn't happy that Apple has a trademark for the term "App Store" and are trying to get it thrown out. In a motion for summary judgement filed with the Trademark Trial and Appeal Board, Microsoft’s lawyers said: “Any secondary meaning or fame Apple has in ‘App Store’ is de facto secondary meaning that cannot convert the generic term ‘app store’ into a protectable … END_OF_DOCUMENT_TOKEN_TO_BE_REPLACED 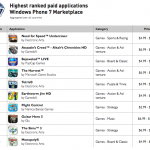 Distimo is out with their monthly report on mobile app stores. Included with the report are the highest ranked paid applications and it's clear that games are currently ruling the Windows Phone 7 Marketplace. Games are priced higher than competitive platforms, but that hasn't slowed their sales. Flight Control for Windows Phone 7 was priced in the range of $2.99 - $3.97 … END_OF_DOCUMENT_TOKEN_TO_BE_REPLACED

Surprising exactly no one, a recently crafted NES emulator for WP7 won't be in the marketplace. Whacked together in a couple of hours as a port of SharpNES, it only runs at around 20fps, but is mostly functional. The creator talked to Microsoft, and they said they wouldn't allow it in the Marketplace (no, really?), so now he's trying to get some community support to get them to … END_OF_DOCUMENT_TOKEN_TO_BE_REPLACED

WPCentral has been given a proof of concept which shows them breaking through WP7 Marketplace's DRM. The weakness has apparently been known to developers for some time, and WPCentral has given the information to Microsoft, and are working to patch the hole. The program can: ...successfully pull any application from the Marketplace, remove the security and deploy to an … END_OF_DOCUMENT_TOKEN_TO_BE_REPLACED 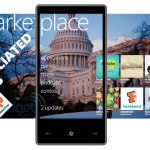 In less than two months, Windows Phone 7 Marketplace has amassed over 5,000 apps. To put that in perspective, that's just as many apps as Palm's webOS, a platform that has been out since June of 2009. Like any App Store, there are some less than great apps, but we haven't seen a wealth of crap apps. That tells us that the 5,000 mark is a very real number and it means that … END_OF_DOCUMENT_TOKEN_TO_BE_REPLACED