In early October, Microsoft had a big launch party in NYC. Steve Ballmer was on the Today Show and the coming out party for Windows Phone 7 was underway. This was more announcement party than launch party, since the phones weren’t available initially. That would come a month later or in the case of the Dell Venue, TBD. There were no lines to speak of, unless you count the few … END_OF_DOCUMENT_TOKEN_TO_BE_REPLACED 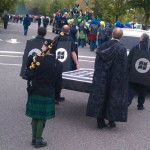 We get that the Microsoft team has been working real hard on Windows Phone 7 and delivering the RTM on time was certainly a milestone. Management could have thrown a party or given a few folks some time off. Instead we find out via Neowin that a parade through the Redmond campus took place complete with iPhone and BlackBerry hearses. Employees were claiming they had buried the … END_OF_DOCUMENT_TOKEN_TO_BE_REPLACED

You've seen the slick UI, seen screenshots of apps, heard about support for Netflix "watch now" and saw an impressive list of developers on board. Everything's good right? Yes and no. It appears Microsoft is hell-bent on creating a consumer experience for "Life Maximizers". What's that mean? It means they are going to control a number of aspects when it comes to the Windows … END_OF_DOCUMENT_TOKEN_TO_BE_REPLACED

The Moto Q11 has been making the rounds this week with it's release in Brazil and now showing up on Motorola's site. It won't hit the states officially until December of this year, but we'd thought it'd be fun to see how the new Q compares size wise to the iPhone and the Moto Q9h Global. The Moto Q11 appears to be smaller from all angles, which I'm guessing should be more … END_OF_DOCUMENT_TOKEN_TO_BE_REPLACED

The Good Housekeeping Research Institute study engineers and a consumer panel compared 11 new QWERTY phones under $300 (suggested retail price with a two-year service) along with the iPhone ($400 suggested retail) and evaluated the phones for simplicity of text-messaging, text delivery speed, battery life, as well as ease of placing calls and voice quality. The Moto Q 9h came … END_OF_DOCUMENT_TOKEN_TO_BE_REPLACED