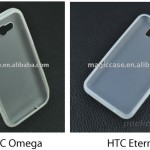 The fall is always a busy season for phones and this will also be the coming out party for Mango. Cases were spotted by PocketNow for two rumored devices. HTC Omega and Eternity cases were found on alibaba.com and the positioning of the camera and flash match previously leaked images. Where there's smoke, there are new phones? As for specs, these are both rumored to have … END_OF_DOCUMENT_TOKEN_TO_BE_REPLACED