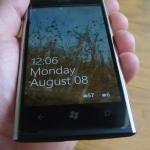 When Microsoft announced the OEM partners for Windows Phone 7, Dell was among the group that would deliver the first handsets. Initially available for T-Mobile, a version of Dell Venue Pro would later be released that would support AT&T bands. Unlike other launch partners, the Dell Venue Pro wasn’t made available for sale in traditional brick and mortar stores. It was also … END_OF_DOCUMENT_TOKEN_TO_BE_REPLACED