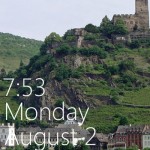 Paul Thurrott of Windows Phone Secrets took his pre-release WP7 device with him on a trip to Germany, and found a pretty cool little automatic trick the OS has. See that little triangle at the very top of the screenshot above? That's the icon that pops up when you're roaming. And when that happens, the phone automatically turns off data. That's right, you won't accidentally get … END_OF_DOCUMENT_TOKEN_TO_BE_REPLACED

The KIN has been the subject of sharp criticism for it's quasi smartphone positioning. It's not a feature phone, but it's not a smartphone. Right now, it's positioned as a social networking phone. Sensing the criticism, Microsoft and Verizon defended the KIN and in doing so, provided some interesing information on the future of the platform. Once Windows 7 Phone is released, … END_OF_DOCUMENT_TOKEN_TO_BE_REPLACED