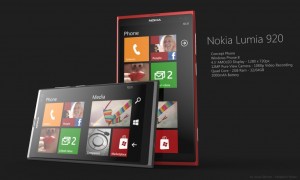 The latest rumor comes from a “personal source” at Mobility Digest, Nokia is working on a new Windows Phone which currently holds a new design and a dual-core processor on board. The source claims Nokia has been testing out the device for some time now, and the main features noticed include a 3.5″ to 4″ screen (no information on the technology), a 8MP rear camera, and the aforementioned dual-core processor.

Apparently, this device being tested is so rectangular that it can stand up on its side. The design is apparently set to relate with the “Metro UI” feeling, but it may be too much. The sharp edges of the rectangular design also seem to make it uncomfortable to hold the device for too long. The rumored device also seems to be made of a different material, unlike the usual polycarbonate already found on the current Nokia Lumia lineup.

Mobility Digest assumes this device will be a new low-tier Windows Phone from Nokia in due time, while Windows Phone Daily thinks this is a follow up device to the Lumia 800. Either way, according to the source of Mobility Digest, this rumored device was being put up against the newest iPhone and Samsung Galaxy S III to see how it matched up.