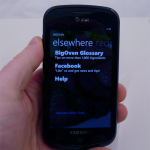 If you enjoy cooking or simply looking for ways to use leftovers, then look no further than BigOven for Windows Phone 7. It’s a free app that is available in the Marketplace. Read on for our review and we'll even throw in a tip for some tasty meatloaf. BigOven provides you with access to over 170,000 recipes, all from your Windows Phone 7 device. You easily search … END_OF_DOCUMENT_TOKEN_TO_BE_REPLACED

We interrupt our normally high brow coverage of Windows Phone for this roundup. Like it or not, fart applications have become the fabric of any credible App Store or in this case Marketplace. In Apple's App Store, iFart sold 38,927 copies of their room clearing app in one day. People buy these apps. We figured we'd do our civic duty and provide our readers with a roundup of … END_OF_DOCUMENT_TOKEN_TO_BE_REPLACED 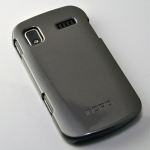 The Samsung Focus has only been out for a few weeks, so there aren’t as many choices when it comes to cases. Case selection at AT&T also seems to vary, but at most you’ll find three cases. One of which is the Incipio Feather case for the Samsung Focus. … END_OF_DOCUMENT_TOKEN_TO_BE_REPLACED

The first round of WP7 reviews are starting to float in, and tech heavyweight Walt Mossberg has weighed in — and is less than fully impressed. For those of you who aren't familiar, Mossberg is the tech editor for the Wall Street Journal, and arguably the most important journalist in the field — especially for lay people. He took WP7 for a spin, and isn't totally … END_OF_DOCUMENT_TOKEN_TO_BE_REPLACED