Courtesy of another reader tip-off over at WPDownUnder, Optus data plan prices have been revealed for the upcoming June launch of the Nokia Lumia 900. There is surprisingly no release date revealed yet, but the pricing structure does reflect expectations from Optus.

Conveniently, WPDownUnder has put together a great mockup of the so-far released pricing plans available for the Lumia 900 through Optus. Take a look below. 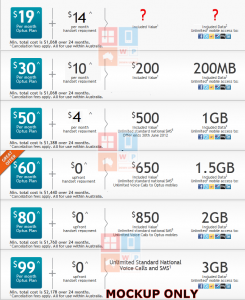 Considering Optus will want a break after promoting other devices, it is expected that the Lumia 900 will launch some time in the first two weeks of June.

RRP has been reported at $699, and according to sources only black and white models will launch through Optus. Whether the available color options will expand with due time is unknown.