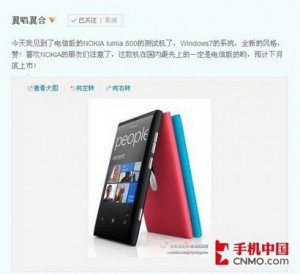 With the official Windows Phone arrival in China recently, information has been received about the Nokia Lumia 800C arriving sooner than the April 15th expected date. The Lumia 800C will actually arrive in China on the first Saturday after the Nokia launch event which takes place on March 28th. Saturday, March 31, 2012 marks the arrival of the CDMA 2000 tailor made Lumia 800C for China Telecom. The standard Lumia 800 will still arrive on April 15th, only the Lumia 800C will be the first Nokia Windows Phone to arrive in China on March 31st. The Nokia Windows Phone lineup is set to begin showing up in China following the March 28th launch event.

The Nokia Lumia 800C has also already received a lower price, although it is not confirmed whether the price drop is permanent or temporary.