A new Samsung device has recently passed certification on bluetooth.org, the qualified details only provide models and numbers specific to Samsung, but it does reveal the now known design model number. The design model number reads GT-S7350 and is what many believe to be a future Samsung Windows Phone. 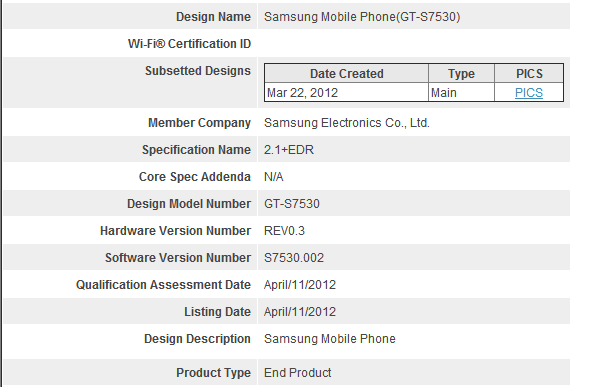 Since its appearance on the Bluetooth certification website, the Samsung GT-S7350 is now also listed on the Lynx Interactive WP7 Device Stats page. Per the device stats page, there seem to be four active models of the Windows Phone currently out in the world, at Windows Phone OS version 7.10.8773. The current version of the GT-S7350 is the same Tango 1 version currently available on the Nokia Lumia 610.

Online benchmark tests put the GT-S7350 as a low end device, it is unclear where it will be destined for as no further specifications are available. Many are currently taking this device to be the rumored Samsung Windows Phone under the code name “Minuet.”