In an exclusive internal email posted over at WinRumors, AT&T has finally set a date for the NoDo update release. The release  is (finally!) set for April 19, upon which NoDo will be available all at once for LG Quantum and Samsung Focus devices. It seems HTC Surround users won't be so fortunate, as AT&T states that NoDo release won't happen until mid-May release. There … END_OF_DOCUMENT_TOKEN_TO_BE_REPLACED 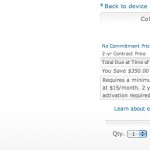 Continuing the ongoing price war of Windows Phone 7, AT&T is now offering two of their handsets for just $49.99 on a two-year contract. The Samsung Focus and LG Quantum have both been dropped to that price, assuming you sign up for the usual deal: two-year plan and minimum $15/month in data. What's really odd is that the press release says these are going for $50 each, … END_OF_DOCUMENT_TOKEN_TO_BE_REPLACED 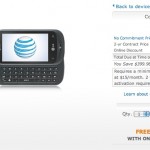 It seems like there's always one or another incredible sale for a Windows Phone 7 handset, and today we see that AT&T has dropped the price of the LG Quantum to a mere penny. This one requires the standard two-year contract, plus at least a $15/month data fee. If you're desperate for a Windows Phone 7 handset with a QWERTY keyboard, the Quantum has got you covered with a … END_OF_DOCUMENT_TOKEN_TO_BE_REPLACED 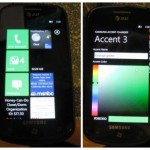 We recently covered the advent of hacks that let you change your accent colors for HTC (now available in app form), and the capability is rapidly spreading. Samsung and LG users get their chance, courtesy of Dave Ameanta — and his app supports HTC users too. The app simply lets you edit the name and color value for all 10 of the installed accent colors. Simply edit the color, … END_OF_DOCUMENT_TOKEN_TO_BE_REPLACED

Talking to Pocket-Lint, marketing strategy and planning team director of LG Electronics James Choi gave a frank discussions of the company's feelings about Windows Phone 7, and how they're in for the long run, even though the launch didn't go as well as they'd hoped. LG feels that the launch was disappointing, partly due to a lack of exposure for the new OS, as well as not … END_OF_DOCUMENT_TOKEN_TO_BE_REPLACED