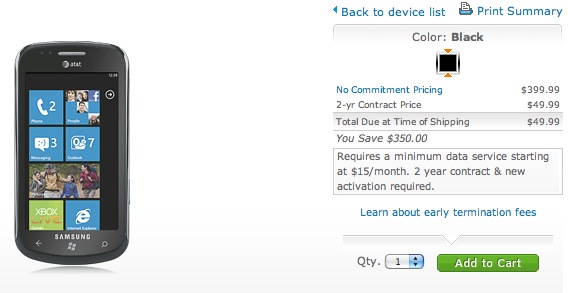 Continuing the ongoing price war of Windows Phone 7, AT&T is now offering two of their handsets for just $49.99 on a two-year contract. The Samsung Focus and LG Quantum have both been dropped to that price, assuming you sign up for the usual deal: two-year plan and minimum $15/month in data.

What’s really odd is that the press release says these are going for $50 each, but if you jump on AT&T’s website you see a refurbished LG Quantum, HTC Surround and Samsung Focus for free, a brand new LG Quantum and HTC Surround for $0.01, and only the new Samsung Focus is at the advertised $50 — which seems curious.

DALLAS, March 28, 2011 /PRNewswire/ — AT&T * is putting an extra spring into the steps of customers this season with limited time pricing on five premier smartphones from its industry-leading portfolio. AT&T customers can now get the Samsung Captivate™ for $99.99, BlackBerry® Torch, Samsung Focus, LG Quantum for $49.99 and the BlackBerry® Curve™ 3G for $29.99 after a two-year commitment (no rebate required.) These offers are available in AT&T company-owned retail stores nationwide and online.

A Windows Phone with a slide-out keyboard for quick use of Office Mobile®, users can stay active and up to date with work. The LG Quantum also features DLNA technology through a preloaded application called Play To, which allows users to wirelessly stream videos, music, and pictures from the phone to a DLNA-enabled TV, stereo, Windows 7 PC and other consumer electronics devices.

For the complete array of AT&T offerings, visit http://www.att.com/.

*AT&T products and services are provided or offered by subsidiaries and affiliates of AT&T Inc. under the AT&T brand and not by AT&T Inc.