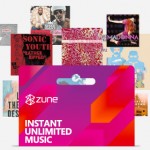 The Zune Pass is a great product and now it can be had for less, albeit with some pretty major changes. Microsoft today announced that starting on Monday, pricing will be reduced to $9.99 a month, which is roughly $5 cheaper. There have been changes to the number of devices you can use on one Zune Pass, with the new limit set to four. The previous pay model allowed users the … END_OF_DOCUMENT_TOKEN_TO_BE_REPLACED

It's been circling the drain for a while now, but is this the final demise for the Zune? Bloomberg's Diana Bass believes so, at least in hardware format. In a tweet, she said: Microsoft won't produce any more new models of the Zune video/music player hardware, a source tell us. Continuing on to say: Instead Microsoft will focus on the Zune software that's used on Windows … END_OF_DOCUMENT_TOKEN_TO_BE_REPLACED 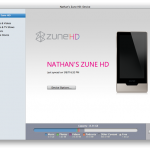 Zune and Macs don't really tend to play very well together, but with a bit of command line jiggery-pokery, it looks like there's a workaround now. As always with this sort of thing, you take your device's life into your own hands. Written up on the AnythingButiPod forum by nate8nate, here's the trick: Download the Windows Phone 7 Connector Open Windows Phone 7 Connector and … END_OF_DOCUMENT_TOKEN_TO_BE_REPLACED 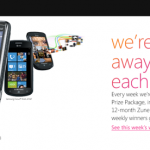 Zune is running a contest where you can win a Windows Phone 7 prize package that includes a 12-month Zune Pass subscription. Each week, one lucky winner will win the grand prize and five weekly winners will win a 1-month Zune Pass. You can enter here and note the option to tweet for an extra entry. … END_OF_DOCUMENT_TOKEN_TO_BE_REPLACED 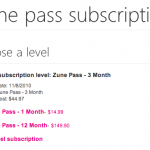 The Zune Pass has long been a monthly service, but starting today you can subscribe yearly. The new annual Zune Pass offers all the benefits of the monthly plan (10 free songs per month, unlimited streaming), but now at a value when subscribing annually. Yearly Zune Pass subscriptions are now $149.90, which breaks out to $12.49 per month. That's a savings of$2.50 off the … END_OF_DOCUMENT_TOKEN_TO_BE_REPLACED