If you’re anything like me, you’re an Xbox Live fan and a WP7 user too. I use my Xbox for almost everything like streaming movies via Netflix, listening to music from Zune and keeping up with my friends both during and outside of gameplay. The fact that Xbox Live had integration with WP7 was awesome for me and scoring extra achievements was even better through games like Uno, Angry Birds or Fruit Ninja. With the addition of the Xbox Companion App, things have gotten even better for Live subscribers. Below I’ll give a review of my first impressions with the new app and features of Xbox 360. 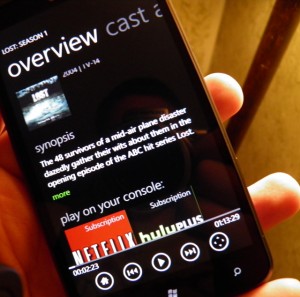 The first thing that might confuse WP7 users is where the app actually is. When I was at work, I used the online marketplace to download the app only to find that it wasn’t in my app list. I tried it again. No dice. Then I took a chance and looked in the Xbox Live Games hub. Lo and behold, there it was! No, the app is not a game but it’s been relegated to this particular area on the phone. After thinking about this for a little I guess it makes sense. Sort of.

Once you find the app and open it, it’ll give you a few tips to get started. You of course need to have your Xbox 360 turned on and signed into your Live account as well as have updated your 360 for the new UI that borrows heavily from the Metro interface. The app recommends that you be on the same wifi connection as your 360. After this, you just need to enable the app in the system settings. Your phone will help guide you through all of this and it’s very easy to do.

Now that you’ve got that all setup, you’re ready for the fun to begin. I have to say I was really impressed with the app overall.It did most of the things I expected it to do even though things took a little trial and error to figure out. Bing search is front and center in this app and when you do a search for ‘Lost’ the TV show, for example, you’ll see a list of results. 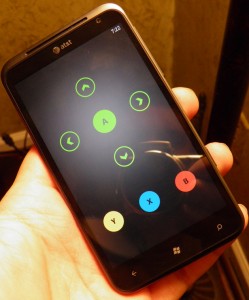 After clicking the right one, you are then shown a list of all the seasons. Drilling down into a season will then give you all of the episodes for that particular season, naturally. The lists are presented in reverse chronological order which I’m not sure if that was Microsoft’s intention or not. This could be annoying if you are just starting to watch a particular show or season since you need to scroll to the bottom to reach the first episode.

When you click on an episode the app will present you with the options you have to watch the show or learn more about it. You can view cast or episode information as well as click on Netflix or Zune to begin playing that particular episode. Since I’m a Netflix subscriber, the episode starts playing automatically. The app then basically turns into a remote control. You can pause, fast forward, rewind, stop and continue playing the show if you want to. You can go back into the ‘home screen’ of the app if you’d like and the show will still keep playing. You also have the option of turning the app into an Xbox controller with a directional pad and the Xbox buttons (A, B, X, Y). 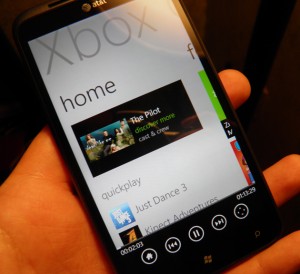 There’s a lot you can do with this app and I found the controls to be intuitive and easy to use. The fact that you can use it as a remote for media purposes is a big reason to download it. I did notice that if you let your screen turn off or lock your phone, when opening the app again there will be a lag between when you can control the media on your TV because the phone is attempting to re-connect to the WiFi. I believe this to be an issue with how WP7 handles WiFi connectivity and hopefully it will be corrected in the future. It re-connects rather quickly so it really shouldn’t be a bother.

All in all, I’d say this app is really amazing, especially for version 1.0. It definitely adds value to those of us WP7 users who have Live service and use our Xbox a lot. It’s feature rich and I’m excited to see where the app goes from here. Microsoft has done a lot of work on the 360, Live services and WP7. I don’t think there’s any more doubt that they are in it to win it.

The Xbox Companion App is free and available in the marketplace. Download it today and let us know how you like it or discuss it in our Windows Phone Forums.