If you already had Wordament installed on your Windows Phone, you should have received an update to the new version 2.0 Xbox LIVE edition. If you want to download Wordament go right ahead, it’s now listed as an Xbox LIVE game on the marketplace. The new Wordament obviously boasts the expected Xbox LIVE friends integration, leaderboards, and 200 Gamerscore worth of achievements.

Wordament is published by Microsoft Studios for this now available version 2.0.0.0 release, downloads at 5 MB, and is currently listed to support Deutsch, English, Español, Français, Italiano, Nederlands, and svenska languages.

Wordament is absolutely free, and being a brand new Xbox LIVE title, there is no point downloading the trial version. The game is ad-supported and very addicting (we warned you). My Windows Phone is actually charging right now because I’ve already drained the battery playing Wordament.

The hit Windows Phone 7 game- now with Xbox LIVE! Come play the game that thousands are playing, earn achievements and compete against friends and frenemies alike on the Leaderboards.

This version is loaded with new features including:
– A completely updated visual design with beautiful backgrounds
– By Request- ‘Contains’- reveal every word a tile makes up on the results screen
– Guest Mode- let someone else play, without compromising your stats
– Multiple Languages- Currently UI only, but watch our blog for information on updates
– Now with sounds! (Optional in the options menu)
– Performance Improvements
– Much, much more!

Wordament® is a unique kind of word game—a word tournament—where you are competing with the whole internet to be the best word searcher in every game. Every player is competing on the same board, in real-time, to get the highest score. Will you be the Wordament champion?

Keep your friends close, but your enemies closer! Tap names in the results list to add them to your personal list of Frenemies™, which is shown at the end of every game. Your Xbox LIVE friends will be automatically added!

Wordament features unique, highly playable games. Every board is guaranteed to have over 100 possible words, and every tile is playable. Our dictionary is tuned to help you find the most common words you missed. We also have themed games, like Digrams, where we introduce a simple, but fun secondary goal of using a two-letter tile in as many words as possible.

How you play and how you win is up to you! 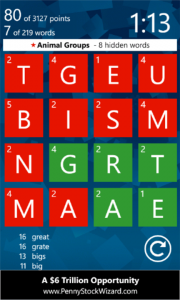 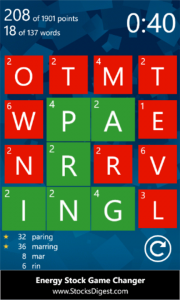 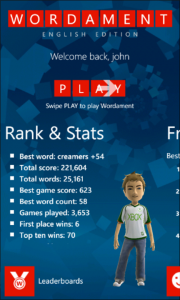 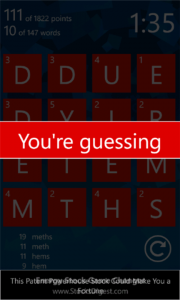 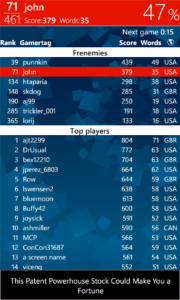 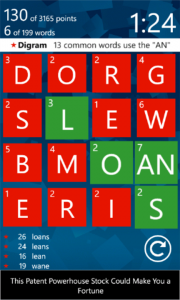 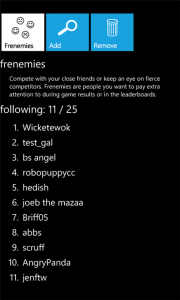