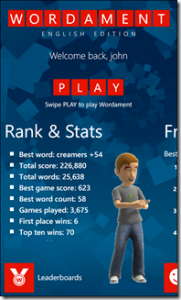 The developers of Wordament want you to know that on April 26, 2012 they will be hosting an evening Wordament Tournament and open house at the Microsoft Store at the Bellevue Square Mall in Bellevue, WA. If you can make it out there, go ahead and participate!

If you already have Wordament downloaded on your Windows Phone, you will automatically receive the Xbox LIVE version update for free. The game is for free regardless so if you’d like you can download it right now so you don’t forget about all the Xbox LIVE glory when it comes to it this Wednesday.

Most importantly, with this update Language Editions have also been added:

Also, at launch we will be rolling out a really exciting new feature: Language Editions. Each Edition will feature puzzles in a specific language. On the 25th, we will be releasing the new English Edition and we will be opening up the Spanish Edition BETA. Each Edition has its own set of stats and leaderboards where you can compete to be a champ in all of the typical categories: including Best of and Top Players. Over the next couple months we will be rolling out additional Editions for Dutch, Swedish, French, German, and Italian. We are marking these new Editions as BETA until we feel that we have reached the quality, playability, and fun that we’ve achieved in the English Edition’s puzzles that we all play today. So please send us your feedback when you play in the new BETA Editions.

Get ready for some Xbox LIVE Wordament madness this Wednesday, with Xbox LIVE achievements and leaderboards also to be had, all for free!