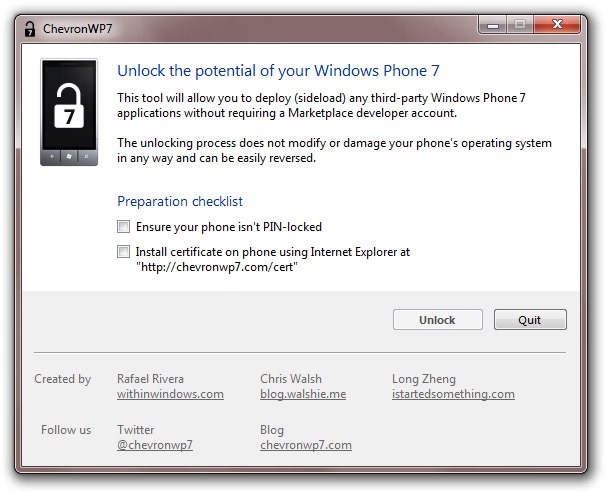 The ChevronWP7 team has been in a locked room with the Microsoft Windows Phone 7 guys for a couple of days, and they’ve just made a blog post about it. While under NDA for much of what they’ve discussed, the hacker team sounds happy with the progress made, and while Chevron won’t work after the next OS update, they’re working on a compromise that will allow some degree of homebrew support:

With that in mind, we will work with Microsoft towards long-term solutions that support mutual goals of broadening access to the platform while protecting intellectual property and ensuring platform security.

In the meantime, a forthcoming Windows Phone 7 update will fix a bug that the ChevronWP7 unlocker tool took advantage of; the tool will cease to work thereafter.

To fill this short-term gap, we’re collaborating with Microsoft on an interim solution that will continue to support homebrew developments after the update. We will share details of this when it has been finalized.