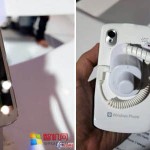 It was last May that saw ZTE come on board as an OEM partner for Windows Phone, and here are some of the first shots of their entry into the world of WP. This is the ZTE Tania, which is being shown off at the China International Communications Exhibition 2011. It's the first Chinese Mango powered phone, though the specs aren't anything to write home about. It packs a a 1GHZ … END_OF_DOCUMENT_TOKEN_TO_BE_REPLACED 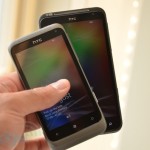 The heavily rumored HTC Omega and HTC Eternity have now been officially  named and announced as the HTC Titan and HTC Radar. The HTC Radar is a mid-end affordable device, pegged at less than $199 on contract. It has 1GHz Qualcomm Snapdragon processor, 512MB of RAM, a 3.7-inch display, 8GB of storage, a 5-megapixel camera and runs on HSPA. The HTC Titan is a flagship … END_OF_DOCUMENT_TOKEN_TO_BE_REPLACED 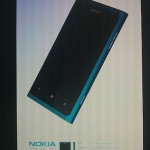 A tipster sent WMPU this snapped shot of a phone that might be the Nokia 703. Now, something like this would be easier to fake than an actual screenshot, because shooting a computer screen with an actual camera hides a myriad of flaws. That said, here's what we (and internet sleuths) can make of the specs listed below the image: Display: LCD 480x800 pixels, 3.7 … END_OF_DOCUMENT_TOKEN_TO_BE_REPLACED