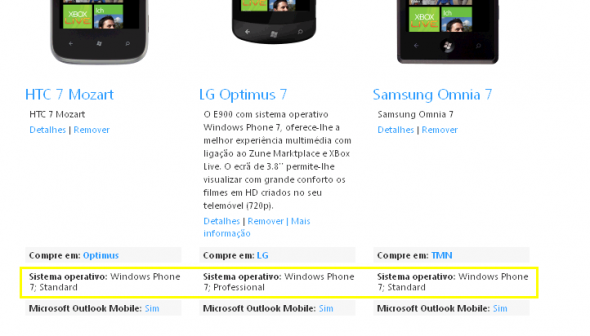 If you go check out the WP7 phones at the official Windows Phone Portugal site, you’ll notice something decidedly unsettling: they’re saying that there are two different versions of the OS — that the Mozart and Omnia 7 will ship with WP7 Standard, and the LG E900 will have WP7 Professional.

This is something that Microsoft does for its desktop OS, but I’m really hoping that Microsoft Portugal is wrong on this matter, because I can’t see this being anything but a real problem if certain handsets get one OS, and some the other.

The only way this would be anything but a problem is if the Professional edition was exclusively for Enterprise customers, and was set up for their needs, rather than shutting important features out of the normal versions.