In early October, Microsoft had a big launch party in NYC. Steve Ballmer was on the Today Show and the coming out party for Windows Phone 7 was underway. This was more announcement party than launch party, since the phones weren’t available initially. That would come a month later or in the case of the Dell Venue, TBD. There were no lines to speak of, unless you count the few stores that featured Minka Kelly. Local AT&T retail locations in my area had a handful of each device, more than enough to meet the demand, which was minimal. LG, who joined HTC and Samsung as WP7 launch partners, have indicated that sales were disappointing. While it’s in vogue to blame Windows Phone 7, it’s the flagship phone that’s the missing ingredient. 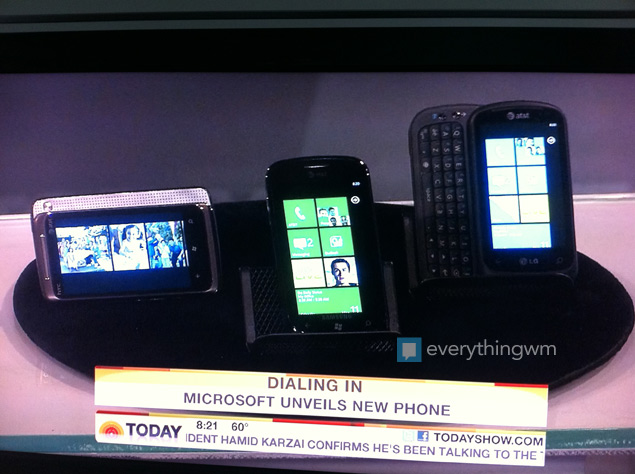 Let’s take a look at that other platform with the green guy. It took years for Android to take off, but look no further than the Droid for why it took off. It’s marketing and positioning. For Verizon customers, Android became the alternative to the iPhone. If you were sticking with Verizon, you likely left one of their stores with an Android phone. Up until the immensely successful Droid campaign, it could have been with HTC’s Droid Eris. What Verizon did with the Motorola Droid was create a flagship phone for the Android platform. Outside of tech blogs and phone geeks, regular folks weren’t talking about Android phones. Those Droid commercials changed the fortunes for Android. Sales volumes have gone up and so has developer interest. That’s not to say sales would not have been brisk. Android was positioned well against the dated OS on RIM’s BlackBerry line and the Droid ship had sailed by the time webOS phones hit Verizon.

Now let’s switch gears to revisit the Windows Phone 7 launch on AT&T, which is the larger of the two carriers where you could purchase a Windows Phone device. Immediately, you are in competition with the iPhone, not to mention a handful of Android devices like the Samsung Captivate. When you look at the devices, there is no clear-cut horse to get behind. Most pundits penned the Samsung Focus as the best of the AT&T devices, but it was just another phone amongst a table of phones in front of Steve Ballmer. People don’t watch those commercials and think, I want that Samsung Focus or that HTC Surround. There is hardly any differentiation between the two, at least from the 60 second ad clip. They see Windows Phone 7, which is the intent of Microsoft’s campaign. There is no hardware that sells the platform, no flagship phone that stands above the rest. Don’t get me wrong, I think the current line of devices are very good, but just how they got lost on that table in front of Ballmer, they are getting lost on the shelves at AT&T.

Now that Verizon will have the iPhone, the race for marketing dollars from phone manufacturers will be heated. For Microsoft, they simply make the OS, so they are somewhat removed from that process. The last time they worked with Verizon was on the KIN and that didn’t work out so well. Windows Phone 7 is not the KIN, but at least the marketing was device specific. Somehow they need to partner with HTC, Samsung or even LG to make a phone that will be worthy of Verizon’s marketing dollars. Verizon has an impressive lineup due this year, so the challenge is becoming increasing greater. Verizon will have the iPhone 4 on February 10th and big Android releases in the HTC Thunderbolt and still-unnamed LTE compatible Samsung phone. For the first time, AT&T will have one of the hottest Android phones in the Motorola Atrix.

The time for a flagship Windows Phone 7 device is overdue and it might just be the reason why sales are not impressive. It’s not the operating system, it’s delivering a Windows Phone that stands out from the rest on the table. While the table of devices will help drive adoption over time, it’s the flagship phone that will get them back in the race.