The very accessible microSD card slot on some Windows Phone 7 devices led many to believe that any microSD card would offer an instant boost in storage capacity. Shortly thereafter, there were countless reports of issues plaguing phones along with the inability to reformat the card after using it your WP7 phone. (see The Great Windows Phone 7 microSD Kerfuffle and The Great Windows Phone 7 microSD Kerfuffle Part Deux). It appears that we’ve got officially supported microSD cards showing up at AT&T stores, complete with Windows Phone branding. The certified cards are priced at $32 for 8GB, which is significantly more than similar sized cards found at Amazon. If you want to try your luck, head on over to this forum discussion. It’s filled with stories of success and failure. If things don’t work, it’s quite possible that your card will be toast, unless you’ve got an old Symbian phone around to format it. 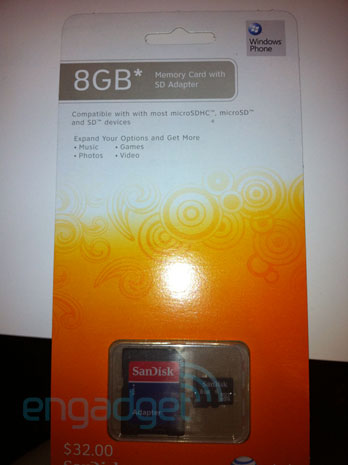