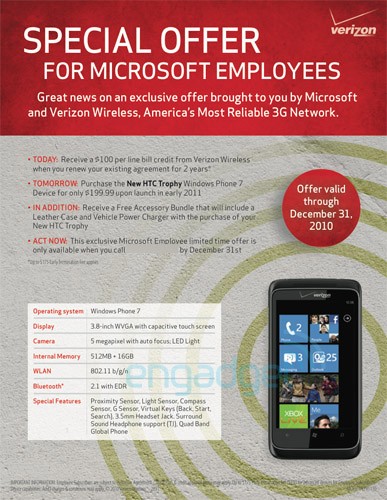 The first Verizon WP7 phone? It looks like it might be the HTC Trophy. This flyer was sent through to Engadget and shows a special deal for Microsoft employees, where if they renew their Verizon contract for another two years, they get the phone plus some free accessories for $200 — more or less what us plebeians would expect to pay. It’s quad band, so you won’t be stuck with CDMA while travelling, has a 3.8-inch screen, 5MP camera, and 16GB of storage.

This is the first specifically Verizon enabled device we’ve seen, but I bet that “early 2011″ will see more than just the trophy landing on Big Red.