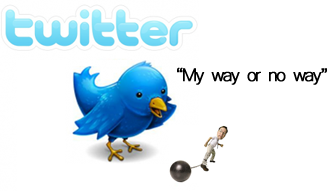 On March 11, Ryan Sarver of Twitter released a statement announcing that Twitter has updated their Terms of Service. Specifically, the changes are directed at development of third party applications (both desktop and mobile) that implement Twitter through APIs and other means. The changes are very much against developers, in a way, as they put Twitter at a position to essentially reject every application from now on that doesn’t appeal to them. Twitter specifically states that all developers will be held to high standards on their applications from now on, with privacy also a big importance.

If you are an existing developer of client apps, you can continue to serve
your user base, but we will be holding you to high standards to ensure you
do not violate users’ privacy, that you provide consistency in the user
experience, and that you rigorously adhere to all areas of our Terms of
Service.  We have spoken with the major client applications in the Twitter
ecosystem about these needs on an ongoing basis, and will continue to ensure
a high bar is maintained.

Most developers have already had their applications rejected before this notice was posted about the updated terms. As a result, developers now work closely with Twitter as much as possible. Developers are making sure their applications now meet Twitter’s satisfaction, as opposed to making applications that add more to Twitter otherwise not normally provided.

Developers have told us that they’d like more guidance from us about the
best opportunities to build on Twitter.  More specifically, developers ask
us if they should build client apps that mimic or reproduce the mainstream
Twitter consumer client experience.  The answer is no.

At one point in the statement there is also an interesting sentence that can be found:

Do 90% of active users really use the official Twitter application? Admittedly most users do use a lot of third party applications, because they just work better. What do you think?