My most recent phone was the iPhone 4S and switching to a different mobile OS obviously leads to a  few things (apps) missing. One app that I really miss right now is Instagram for iOS. I really enjoyed the simplicity, ease of use and great photo filters that made the app incredibly popular. I’ve found three apps in the Windows Phone Marketplace and I’m going to give you a small review of each one. While every app is unique and no two can quite be the same, I’ll do my best to answer what some new Windows Phone user’s may be asking: what can I use to replace Instagram?

Apict
Out of the three apps I compared, this app really seems like a one trick pony. It’s definitely fun and a somewhat novel idea of an app but it doesn’t offer much in the form of customization. I found out about this app because the Windows Phone Team was tweeting pictures using it. Apict basically just takes a photo, applies a filter and puts a border around that photo to simulate a Polaroid type photograph. There aren’t multiple filters or effects to choose from, no editing capabilities except for labeling the photograph and resizing the image. The only thing it has going for it right now is the fact that it starts with the letter ‘A’ which puts it at the top of the app list on your phone. 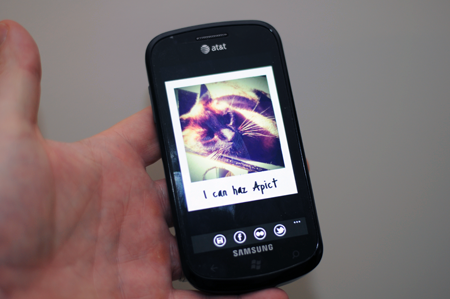 Apict is priced at $0.99 and is available in the Marketplace.

Thumba Photo Editor
Thumba doesn’t have a very intuitive user interface and the first time you use the app you may be slightly confused. Using it for the first time, you might think that there aren’t that many features to this app when in fact, there are many.  Hitting the magic wand button takes you to a customization menu and swiping left or right in the UI takes you to effects, filters, etc. The aesthetic is slightly boring and the app does not use your photo to show an example of each effect like Instagram does. This may not be a deal breaker to some but to me, I’m used to this in Instagram. I also think it’s nice to see a preview of what you’ll get in your particular photo. 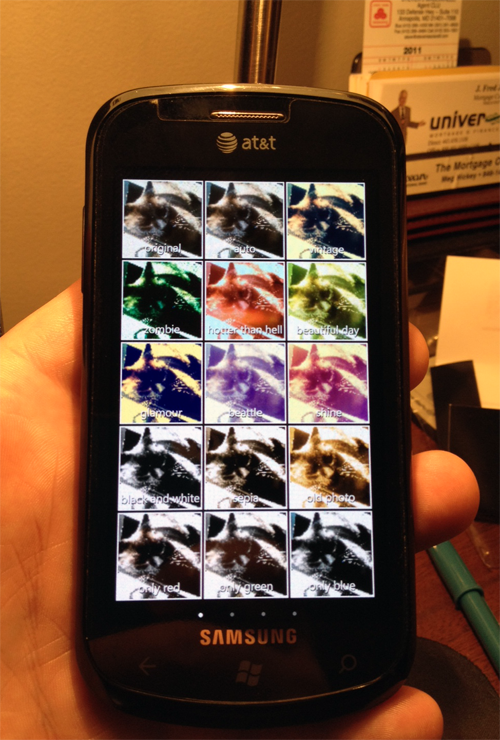 Thumba also offers a ton of editing options for color, saturation, levels, color gradients, among others. The feature set is impressive and has effects like tilt-shift and lens flares. Tilt-shift is something from Instagram that none of the other apps currently have. Despite all this, I’d really like to see some improvements made in terms of the UI. I don’t think the developer captured the romance of the Metro UI and the menu selections just seemed unimaginative.

Thumba is available in the Marketplace and is priced at $.99.

Pictures Labs
This app happens to be my favorite by far. It’s probably the closest thing to Instagram you’ll get on WP7 phones. The interface takes advantage of the Metro UI, has lots of effects and borders but doesn’t offer tilt-shift. It does however provide preview images for effects. It’s sort of a mixed bag of decent features but not quite having enough. I’d like to see more of what Thumba offers put into this app. One complaint I have is that the trial for this app limits the ability to share photos. I think it would be better for the developer if a person could create a photo or two, share them and then ask the customer to purchase the app. Not being able to share something that I make doesn’t necessarily make me want to buy something, it just annoys me.

For now though, I think I’ll be using this app a lot more than the other two. I really do like seeing a preview of images with a filter I’m thinking about versus waiting for the phone to process the image to even see if I like the outcome. It’s a small feature but one that really makes Thumba a deal-breaker (for now).

Pictures Labs is available in the Marketplace and is priced at $0.99.

Have you tried any of these or do you have some other favorite apps? Share your favorite apps and your thoughts with us in our Windows Phone Forums.