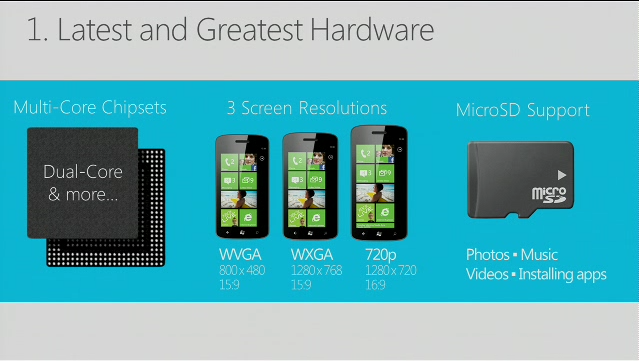 Whether you are excited or surprised about this hardware feature(!), you can’t help but jump up and down at the fact that Windows Phone 8 devices will have true MicroSD support. This means you will be able to insert a MicroSD card into your Windows Phone 8 whenever you want (no more hard resets!), and remove it whenever you want. Use your MicroSD to transport pictures, videos, and even applications between your other Microsoft devices. This hardware feature will also allow both manufacturers and carriers alike to reduce the price of desired Windows Phone 8 devices. If a customer wants more content or storage on their Windows Phone they can simply purchase a MicroSD separately.

NFC wireless sharing: If you haven’t heard the term “NFC” yet, I’m betting you soon will. This emerging wireless technology lets phones share things over short distances. In Windows Phone 8, it helps make sharing photos, Office docs, and contact info easier—just tap your phone another NFC-equipped device. How cool is that?

All hardware features above are set as must-haves by Microsoft to manufacturers of Windows Phone 8 devices. Therefore, you can expect every Windows Phone 8 device, beginning with those releasing later this year, to have multi-core chipsets, a selection of amazing resolutions depending on display size, and full MicroSD support.