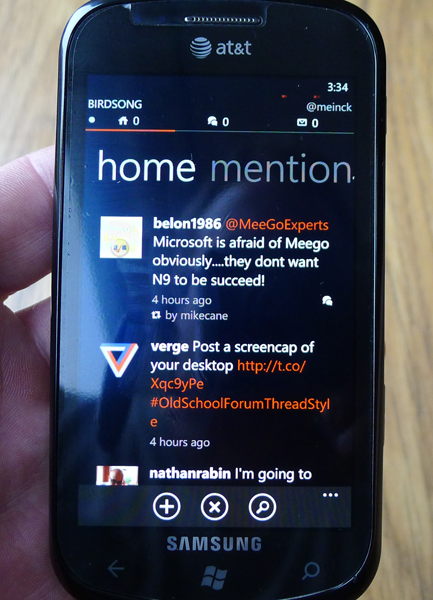 A fantastic Twitter client with a super clean interface that makes the app feel like it’s part the operating system. Birdsong supports multiple accounts and the paid version supports push notifications through live tiles. You can also customize up to 5 timelines in any order that you prefer. The app supports multiple accounts, but you cannot include different accounts within the allocated five timelines. The interface to create a tweet is simple, yet effective. In our tests, scrolling was fast and smooth.

Birdsong is available as a free trial. The full version is only $0.99 and well worth it. 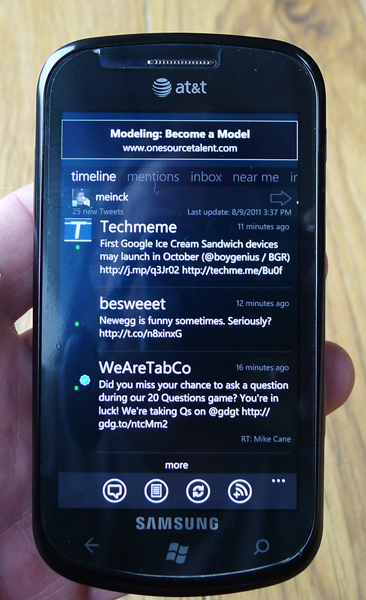 This application is a Windows Phone 7 port of a Windows Mobile app. MoTweets might be the most customizable Twitter app available. If you have multiple accounts, MoTweets allows you to customize your view, allowing users to easily swipe between timelines, mentions and inboxes. This is an excellent feature for power users who need to monitor several accounts. MoTweets also supports live tiles and will provide information on @mentions and new tweets from your homescreen. moTweets will also serve double duty, allowing you to view posts from your Facebook wall. Keeping with the theme of allowing customization throughout, with moTweets, you can choose from 3 skins. Of all the apps tested, MoTweets felt the fastest when it came to retrieving new tweets. If there were a downside to moTweets, it’s the design of the UI. This might be related to having the “kitchen sink of features in one Twitter app”.

There is an ad-supported free version and the full version will set you back $1.99. 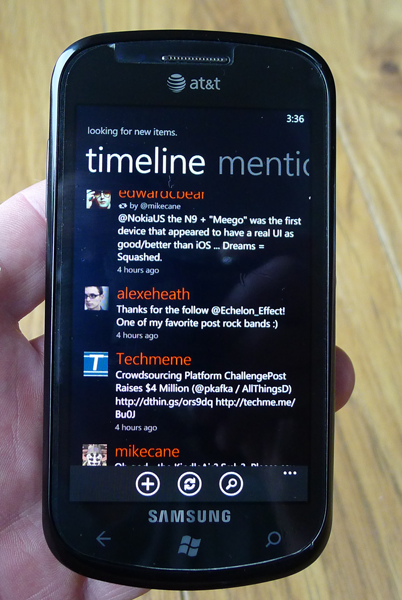 There are many highlights to rowi, one being the minimalistic design theme throughout. Rowi edges out Birdsong as the best looking Twitter app for Windows Phone 7. Rowi also offers a nice feature set for most users, including the ability to customize timelines and live tile notifications. If you are a power user and require support for multiple accounts, you’ll have to look elsewhere. Our hope is that rowi adds this support in the future. When scrolling up and down within your timeline, tweets animate as if they were a button, which is a bit disorienting.

rowi has a full-featured ad supported version for free. The full version is priced at $2.99. If you don’t need support for multiple accounts, it’s hard not to recommend rowi. It even gains points with us for it’s icon design. Well done. 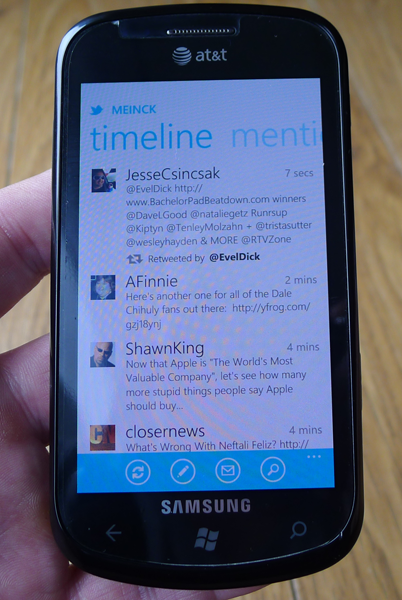 Being the official app, Twitter is able to provide Windows Phone owners with a full featured app at the cost of free. There are no ads and comes with a rich feature set. Multiple accounts, support for lists and it will allow you to select your preferred photo service between TwitPic, Tweetphoto or yFrog. Top Trends, Nearby and even an option to see recommended people to follow in particular categories. There are two themes, light and dark. The dark theme uses a dark blue background. While different, I prefer the black background option found in the other apps, but that’s a personal preference. Timeline load times have improved and were quite good. The official Twitter app lacks live tiles, a great feature found in all of the other Twitter apps. Switching between accounts feels a bit clumsy, requiring you enter your settings and check the box you’d like to view.

Large feature set, updates from the mothership, zero ads and free. Not our favorite, but certainly a good app and an even better price. 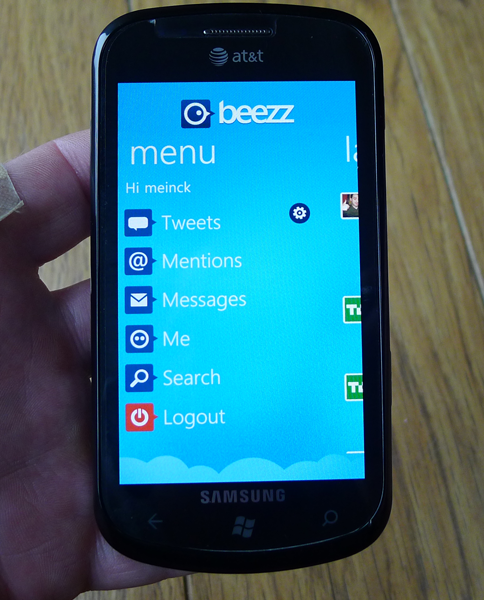 A fun interface that is a departure from the apps on our list. Beezz is playful, light and I enjoyed the ‘toast mentions’ feature, which are also configurable for direct messages. The app greets you with a ‘menu’, rather than jumping directly into your timeline. Neat features include the ability to view the last followers. When you click on menu item, you’re swiftly transferred to the very familiar timeline look. Tapping on an a tweet creates a beatiful effect as if the tweet were a button that were just pressed. The timeline scrolling could be faster, but there is plenty to like about Beez.

Beezz is available for free. With support for notifications and live tiles, it’s worth grabbing in the Marketplace.

These are our top Twitter apps for Windows Phone 7. What are your favorites? Did we miss something? Let us know in the comments. Follow @everythingwm for all things Windows Phone and myself @meinck if you enjoy general smartphone tweets coupled with the occasional photo of my awesome cats.