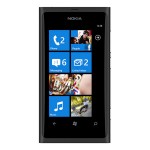 The black version of the Nokia Lumia 800 will be the only one available come launch. As part of the progressive launch, the white version will become available starting March 20. No word on the cyan and magenta colors becoming available.

$0 upfront on the $59 Freedom® Connect Plan (after using an included MRO Bonus for eligible customers) – $550 worth of included calls and MMS, unlimited SMS and 1.5GB of data, all to standard Australian numbers (excludes use overseas) each month. Min cost over 24 months is $1,416. Outright RRP of $672.