Even though everyone jumped on Chris Walshie's statements that the first Windows Phone 7 update would be "massive," and would catapult them past the iPhone, All Things D's Ina Fried has posted a look at the update, and it's less than overwhelming. The hopefully-to-arrive-in-January update will do two thing: allow Sprint and Verizon phones to use WP7, and bring copy-paste to the … END_OF_DOCUMENT_TOKEN_TO_BE_REPLACED 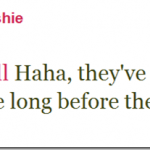 Chris Walshie, one of the brains behind the ChevronWP7 jailbreak, has been tweeting up a storm about the planned update for Windows Phone 7. While he won't reveal his source, he's saying that the update should land in January, and has been saying things like: MS took 3 months to do what Apple did in 3 years. ;-) Let's just say, they could have called it Windows Phone 8 … END_OF_DOCUMENT_TOKEN_TO_BE_REPLACED