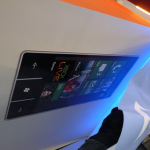 Less than an hour away from Microsoft's event at MWC, but it images are coming out from a banner that show the interface for Windows Mobile 7 and a possible new device. The interface shows boxes displaying missed calls, texts and emails. There is also what appears to be Facebook integration in the top right of the interface. The new Windows Series 7 devices appear to have some … END_OF_DOCUMENT_TOKEN_TO_BE_REPLACED