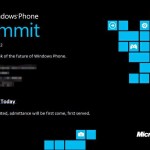 Looks like Microsoft changed their plans for the June 20th Developer Summit, or they just stayed quiet up until now about a sneak peek of the future of Windows Phone. That's right, on June 20th you now have even more reason to save the date, as Microsoft has revealed that on that day you will indeed see the future of Windows Phone. That future is expected to involve the next … END_OF_DOCUMENT_TOKEN_TO_BE_REPLACED