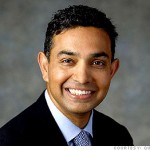 When Windows Phone first launched, Motorola had little interest in the new platform, despite a very successful run with the Q-series running Windows Mobile. “I don’t envision us using Microsoft. I would never say never but it’s not something we’re entertaining now,” said Motorola's Christy Wyatt.They have been very successful with Android and didn't join other phone … END_OF_DOCUMENT_TOKEN_TO_BE_REPLACED

Motorola has named Sanjay Jha, CEO of Qualcomm, to head up the company's handset division. Jha will also act as the co-chief executive to Greg Brown. Jha is charged with turning around a beleaguered handset division that has been mired in finding a follow-up to the once popular RAZR. Last week, Motorola announced they has shipped 28.1 million cellphones in the second … END_OF_DOCUMENT_TOKEN_TO_BE_REPLACED