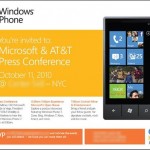 We still haven't received our invitation (probably an oversight), but we've all the details on the October 11th Windows Phone 7 launch event. First off, AT&T will be the first wireless carrier to take the stage with Microsoft's Steve Ballmer. Later in the day, we'll hear from T-Mobile, who will undoubtedly show off their Windows Phone 7 phones. Two carriers, plenty of new … END_OF_DOCUMENT_TOKEN_TO_BE_REPLACED

Engadget received a giant bundle of device launch dates for AT&T, most of which are boring Android and Blackberry devices, but there are two on there that are slightly more interesting. Set to debut on October 17: the "Patek" and "Universe" from Samsung. Given the date's proximity to the presumed Windows Phone 7 launch, we'd argue that at least one of these is likely the … END_OF_DOCUMENT_TOKEN_TO_BE_REPLACED