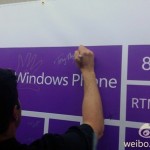 There had been stories of delays, but those can be put to rest as Windows Phone 8 has been released to manufacturing or what developers would term RTM, Gold. In other words, it's finished and ready to rock. Sent to manufacturers, including Nokia, who can start the process of preparing for shipment of devices to market. Sources tell WPCentral that the build was "on time". Team … END_OF_DOCUMENT_TOKEN_TO_BE_REPLACED

The next major milestone in the release of Windows Phone Mango is official according to the Windows Phone Blog. Microsoft has signed off on Windows Phone Mango, moving it to the released to manufacturing stage. For current users, the update unfortunately will not be available until this fall. This should pave the way for manufacturers to ramp up production for the second … END_OF_DOCUMENT_TOKEN_TO_BE_REPLACED