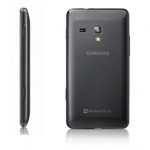 Samsung just recently announced the Samsung Focus 2, but it looks like Samsung is set to be on a roll for a while (hopefully) with the Windows Phone announcements. Samsung has now also announced, over the weekend, a new Windows Phone, the Omnia M set to initially launch in Europe. The phone will be Samsung's set-to-compete Windows Phone against the Nokia Lumia 610. That said, … END_OF_DOCUMENT_TOKEN_TO_BE_REPLACED