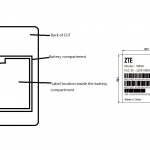 In a surprising appearance through the FCC, a ZTE device under model number N859 with Windows Phone 7.5 on board may just release before Windows Phone 8 devices later this year. Either that, or ZTE is oddly passing this device through certification to release it as soon as possible, and will just update it with Windows Phone 7.8/8 later on in the year. Apart from the fact … END_OF_DOCUMENT_TOKEN_TO_BE_REPLACED