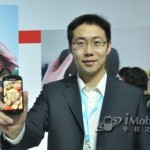 After at least a year of speculation and rumor mill churning, the leaked Lenovo "S2" device has finally been confirmed by Lenovo’s LePhone Product Manager, Yue Chen. In a short but informative interview with iMobile this past Tuesday, Chen told reporters the Lenovo S2 has a clear timetable for 2012 and the rumors are all true. Yue Chen gave some specifics and details on the … END_OF_DOCUMENT_TOKEN_TO_BE_REPLACED