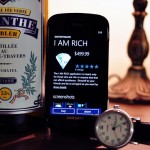 I Am Rich was an infamous iOS app which cost $999.99 — the most an app could cost — and did nothing. An example of conspicuous consumption so extreme that it was immediately thought a parody, the only thing that the app provided if you bought it, was a poorly spelled motivational message. Now the app is available on WP7, for a mere $499.99! That's half the price! Does that mean … END_OF_DOCUMENT_TOKEN_TO_BE_REPLACED