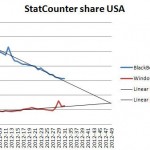 According to StatCounter, the install base for BlackBerry continues on a downward trend. If we're being honest, it's a complete freefall, with the percentage dropping from roughly 6 percent to 3-plus percent in week 31 of 2012. During the same timeframe, Windows Phone has seen slow and steady growth - emphasis on slow. The trajectory of BlackBerry coupled with the movement of … END_OF_DOCUMENT_TOKEN_TO_BE_REPLACED 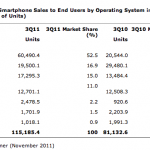 A report out today from Gartner details worldwide smartphone sales by operating system and show a decrease in market share for Microsoft from 2.7% to 1.5%. They do not break out Windows Mobile and Windows Phone, so it's not clear if sales of Windows Phone increased, decreased or remained flat. One thing is for certain, during Q3 2011 they trailed Bada, which cannot be a good … END_OF_DOCUMENT_TOKEN_TO_BE_REPLACED