ChevronWP7, a software tool that unlocked Windows Phone 7 devices, was discontinued back in 2011. At the time, the developers indicated that they would be working with Microsoft on a possible official route to unlocking. The group met with Microsoft in January. Through this discussion, we established a mutual understanding of our intent to enable homebrew opportunities … END_OF_DOCUMENT_TOKEN_TO_BE_REPLACED

Jaxbot over at Windows Phone Hacker, the same person who discovered the "Dehydration hack", has taken it a step further and is developing an application called "Multitask7". An application which adds multitasking capabilities to Windows Phone, something that won't be possible for third party applications until the Mango update. … END_OF_DOCUMENT_TOKEN_TO_BE_REPLACED 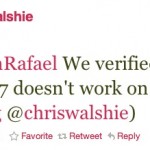 ChevronWP7 developer Chris Walsh, who is currently having a nice fireside chat with Microsoft about jailbreaking and app development, as confirmed that ChevronWP7 will not work on the next update for WP7. The minor update, known as NoDo is rumored to bring copy and paste as well as minor other bug fixes — including the death of Chevron. Over Twitter, Walsh retweeted what a … END_OF_DOCUMENT_TOKEN_TO_BE_REPLACED

Microsoft just concluded their meeting with the developers behind ChevronWP7 where they showed us they have a sense of humor, offering the devs a lousy t-shirt for their efforts. In a curious move, Brandon Watson has reached out to George Hotz a.k.a. Geohot (via Twitter) inviting the jailbreaking legend to "build cool stuff on WP7".  Geohot is well known as the man to jailbreak … END_OF_DOCUMENT_TOKEN_TO_BE_REPLACED