Microsoft is on point with their initial announcement of six weeks of "Must Have Games" coming to the Windows Phone. Initially, they made the announcement with a set date of May 25, and on that day exactly, the six weeks of six games begins. The official word from the Xbox division working on the launch of the six games has been given, along with pricing and release dates for … END_OF_DOCUMENT_TOKEN_TO_BE_REPLACED 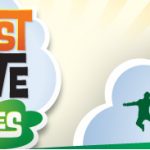 Microsoft has announced "Must Have Games", a collection smash hit games that will make their way to Windows Phone 7 this spring. All of the games support Xbox Live features. The list includes some impressive titles, at least based upon sales on competitive platforms. Yes, Angry Birds is on the list. Here's what you can expect: Hydro Thunder Go Sonic the Hedgehog 4 … END_OF_DOCUMENT_TOKEN_TO_BE_REPLACED

Earlier this week we posted news about an Angry Birds look alike WP7 game being released as a beta. Just now a new version (0.6) has finalized, and it is available in the marketplace. By the way, this new version isn't necessarily an update, but has been published as a new game titled "Chicks'n'Vixens Beta". The original application, from the same developer we posted about … END_OF_DOCUMENT_TOKEN_TO_BE_REPLACED 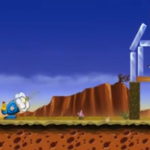 If you enjoy Angry Birds (and who doesn't), then the wait has been arduous. A new app released in the marketplace might help ease the pain. Chicks 'n' Vixens is now available in beta on the Marketplace and offers similar gameplay to Angry Birds. The game is currently free, but that's going to change once it's out of beta. If you download it now, the developer promises that … END_OF_DOCUMENT_TOKEN_TO_BE_REPLACED 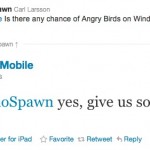 Because everyone is crazy excited constantly about Angry Birds, we finally have some good news for a WP7 version, even if it's not to precise. In a tweet responding to a query about if a WP7 version is in the works, Rovio said: yes, give us some months... Specific? No. Encouraging? Hell yes! … END_OF_DOCUMENT_TOKEN_TO_BE_REPLACED