During the Qualcomm CES 2012 keynote, it was announced that Qualcomm is working with Microsoft to bring the new S4 processors to Windows 8 mobile devices.  The biggest information about the Snapdragon™ S4 processors is that they bring LTE connectivity to any mobile device they are installed into. The lightning fast speed of the new processors was demoed by Qualcomm on the CES floor with this quote from the press release:

In today’s world more and more consumers want more power and performance without sacrificing battery. This constant ‘gimme more’ from consumers is what drives Qualcomm to always deliver some of the best performing products with almost always better battery life. Having processors like the S4 installed in upcoming PCs, netbooks, tablets, laptops and smartphones will allow for even quicker accessibility, power on and off and more while saving even more battery life. 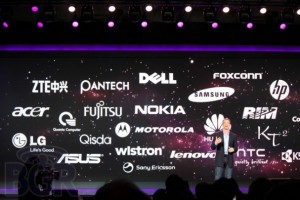 With the new joint effort between Qualcomm and Microsoft, both companies are determined to bring innovative, top-performing devices to consumers around the world. Qualcomm is one of the largest providers of wireless chipset and software technology in the industry. With well known products from Qualcomm, including the Snapdragon chipset and Gobi mobile connectivity solutions, all supporting Windows 8, it is clear why Qualcomm and Microsoft want to work together. Qualcomm, being this large provider of such great chipsets is positioned to work with Microsoft and support both Windows smartphones and PCs.