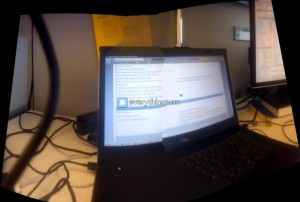 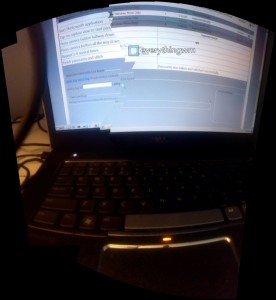 The evidence is courtesy of, what seems to be, a temporary Microsoft Twitter account that has been discovered. That Twitter account is apparently being used by an employee testing the application itself and uploading test images in the process. The very same test images uploaded display a computer going through the Photosynth application processes. The processes shown include application start up, picture taking process (about 3-4 pictures it seems), and final “panorama and stitch” process. 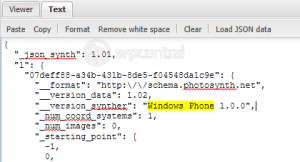 The JavaScript Object Notation (JSON) information from the image also shows a line reading “__version_synther”: “Windows Phone 1.0.0″. This is where it has been concluded that the application is in fact being tested for Windows Phone and seems to have reached a stable version of 1.0.0. Other lines on the uploaded image of the test computer also reveal “(Windows Phone Only)” and “AugmentedReality”.

The yellow brick road can’t be any more obvious. Hopefully, Microsoft realizes the Internet is now aware and will capitalize by giving some more information on Photosynth for Windows Phone.