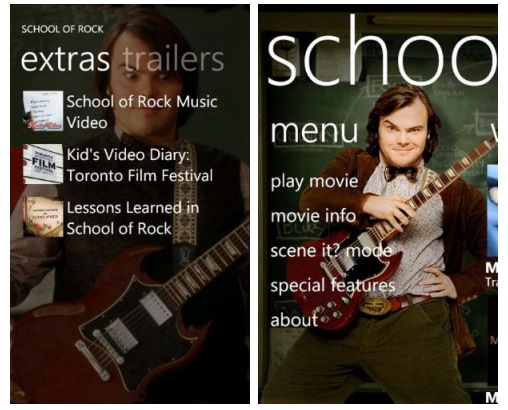 Paramount is set to unleash 10 of its films in app form for Windows Phone 7, bundling not just the movie, but also DVD-style extras into app form. Starting today with School of Rock (download link), and Zoolander, Waiting for Superman, and GI Joe in the works, with more to be announced in the near future. The apps are built on Silverlight, and apparently contain extras not seen in other formats.

What extras will they include?

Other features in the enhanced movie apps include the ability to create custom clips, view the movie with pop-up trivia powered by ‘Scene It?’, and a Movie Info feature offering users the ability to identify actors, objects, music, and places in the movie, while providing rich, contextual information, such as bios, descriptions, and even maps to the locations.

We’re not sure how much these will cost, nor how big the downloads will be, but it’s good to see a major production house throwing some weight behind the platform.