Just last month Nokia properly introduced Camera Extras, and this time they are back at it again with the Play To application. Play To is currently available for download in the Nokia Collection on the Windows Phone Marketplace for all Lumia devices.

Below we have the quick tutorial by Nokia Conversations on how to connect and play your media to DLNA capable devices with your Lumia Windows Phone.

Connecting with Play To 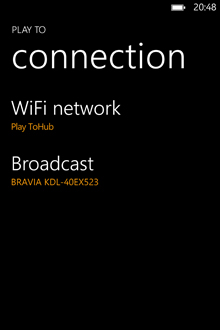 Making a connection between the two could not have been simpler because they are both already connected to my wireless home network.

I opened the Play To app > press Connection >Broadcast and my Nokia Lumia ‘found’ my TV within a few seconds. You only need to tap the TV name for the connection to be established.

On the TV itself, a little dialogue box appeared on the screen asking if it was OK to connect to an ‘external device’ and I selected yes.

Even though it was really fast and easy to do this, what’s really great is that you only need to set up the connection once. On subsequent occasions you simply launch Play To and it will automatically recognise and connect with the TV.

Playing with Play To

After you’ve created the connection, you can return to the main Play To screen, where you get a simple choice of pictures, music or videos.

Streaming pictures was as easy as browsing through the photos on the phone itself. You can go through each of your albums or those on your camera roll.

It worked really smoothly with my TV and there was only a minimal delay after I selected the pictures before they appeared nice and big on my TV.

Just like going through the pictures on your phone, you can swipe through each image in succession for them to be streamed to your the TV.

It felt very cool to see images that I am so used to seeing on my Nokia Lumia, suddenly looking so good on my TV.

Play To Music and Video

From the main Play To screen, you select music, and from there you will see all the tunes that are stored on your Nokia Lumia.

It’s organised by artists, albums, songs, playlists and genres, so you should be able to find what you are looking for even if you have a large collection on your Lumia.

Select an individual song or a whole album and it immediately starts streaming. You can also control the music on your TV, with the simple music player controls within the Play To app.

Music and pictures is great, however, my favourite thing about Play To is the video streaming.

Seeing your still images is one thing, but watching the videos that you’ve recorded with your Nokia Lumia on a big TV screen is another thing altogether.

It’s worth remembering that all this is all done without the need for hooking up any cables, or plugging in a camcorder or messing about with the AV settings on your TV.

Within the Play To app, select the video on your Lumia and it starts playing on your TV.

Rather mischievously, I recorded a video of myself saying ‘hello and surprise’ on my Lumia. Later in the evening, while my partner was watching TV, I secretly launched the Play To and started playing the video.

My video instantly started streaming on the TV, as seamlessly as changing a channel, much to her shock and my amusement.

Such tomfoolery probably shouldn’t be encouraged, unlike Nokia’s Play To app, which can be wholeheartedly recommended.